We had been on the search for a new dog to buy for around 18 months and after a few false starts we came across a litter that was being bred at the famous Nani's kennel. It was quite important to us that we found a dog compatible as a stud for Harmony. We visited Nani's in November 1999 and chose our puppy.

Chip gained his American Championship with ease finishing with 4 majors, his last being a great win of Winners Dog at the Weimaraner Club of Northern Illinois Specialty Show on 9 July 2000. Chip left the US and arrived in Sydney in September 2000.

Chip was very successful in the show ring in Sydney. He was a multi BOB and multi Class in Group & Show All Breeds winner and was Junior in Show at the Weimaraner Club of NSW Specialty show (October 2000) under breed specialist Carol Wright (Grauhund) & Reserve Challenge Dog at a Specialty under Mrs Shellie Marshall (also Grauhund); Chip is a Best Exhibit in Group (Group 1), Runner Up to Best Exhibit in Group (Group 2). He gained his Australian Championship with ease and finished his title when he was DCC, RUBOB Canberra Royal 2000 under breed specialist Mr Keith Simmons NZ (Carnmellis).

In June 2002 Chip travelled to the UK to our friends at Stormdancer Kennels in the South East of England to be campaigned in the show ring and to broaden their gene pool. The Stormdancer breeding programme combines the finest of English and American bloodlines and Chip has already played an influential role in the future development of this line.

Frozen semen from Chip is available in Australia.

He has produced to date:

Further information on Chip can be obtained from Greydove (Australia) and Sandra & Daniela in the UK. 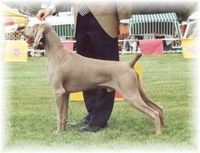