Lili only had one litter for us but what a litter it was! Her name is in many of the pedigrees of some fabulous dogs around the world. She is the dam of SV-02 SVCH Greydove Nordic Liaison (Exp Sweden). His accomplishments include Best Weimaraner and Dog of the year 2004 & 2005; Lrets Hund 2004, - Agria Cup Sweden, all breeds; Best dog of Group 7 at Dog of the year 2004; Årets Hund 2004, - Agria Cup Sweden, all breeds, No. 37 in Swedish Competition DOG OF THE YEAR 2004; TOP SHOW WEIMARANER 2003, SVCH, Swedish Winner 2002 and Swedish Blood Tracking Champion. This litter also produced Greek Ch Greydove New York New York, who has earned a German Hunting Title; and Australia’s own Best in Show All Breeds winner Ch Greydove Nice n Easy. 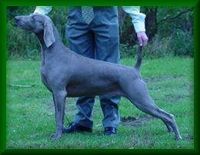