Rosie was a Best in Show winner at Specialty and All Breeds levels, multi class in show and in group winner who has outstanding ring presence. Rosie is one of a litter of 5 puppies bred in partnership by Val with Carol Thompson, Kadma Kennels in Brisbane from frozen semen imported from the Valmar's Kennels in California.

What led Val to import this semen?????

" I first saw Sage when he was 4 months old and thought he was the best 4 months old pup that I had seen. In fact I asked could I buy him. Couldn't of course. So I opted for frozen semen from his father Jazz Time then on a visit the following year, I saw Sage again and my opinion of him hadn't changed, particularly when I saw his grandmother True floating around the back garden chasing the cat next door - she was 11 at the time."

Special thanks to Mrs Joan Valdez and Mr Lee Meadows for sending the semen from Sage. Since then we have kept in very close contact both with Joan and Lee and we have visited with them on our trips to the US. Both Joan and Lee keep close tabs on Rosie's show career and her progeny. They are very proud of her achievements and even have her BIS photo up in the office of the vet who collected the semen.

When it came to being a mother, Rosie was a bitch a breeder could only dream of. Her progeny are featured all over the world including Greece, Hong Kong, Singapore, Italy, Hungary, New Zealand and Japan. She was selectively bred to only the very best including 3 American dogs. She is a producer of several Champion offspring both in Australia and overseas. Rosie has been the bitch that breeders all over the world have come to Greydove looking for a puppy for their kennel because of her presence, this includes NZ Ch Greydove Jittrbug N Swing AI (Weisup), Ch Greydove Jazz After Dark AI (Angel Lakes)and Aust. Ch Greydove Goodtime Girl "Lady" (Graywisdom). Rosie babies feature in many breeding kennels around the world and in Australia.

Rosie came into her own when we bred her to Grand Ch Greysouthen Kings Legend ET TD in producing her mirror image Ch Greydove Poetry in Motion, Tara's likeness to her mother both in appearance and in producing ability has left her with being another bitch sought after by breeding kennels.

"Tara" was bred to Grand Ch Kadma Almost An Angel, producing Ch Greydove At Fala Lovea (Poland) together with Best in Show winner Ch Greydove At Kan Trace (Croatia) leaving Rosie's lines in several more European kennels.
She was then bred to Ch Grauhund Heartbreaker to produce our best so far from this line in Ch Greydove Fine Romance "Enya"

"Enya" was bred to Am Ch Ekahi's Return of the King, the first IID litter to be born in Australia, this produced Greydove Higher Energy shown in Perth and also Ch Greydove Diorrissimo.

"Coral" was bred in 2011 to BISS Ch Amarige Walk The Line and produced Greydove Walkin On Sunshine owned by B&G Stevenson and will be shown in Queensland. 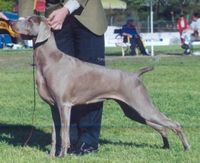